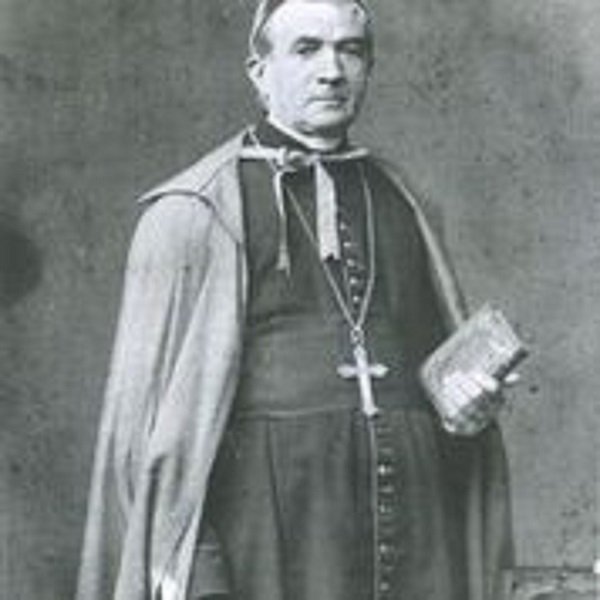 In 1852, the Roman Catholic bishops of the United States gathered at the Plenary Council of Baltimore and recommended the erection of a new diocese to cover the entire northern part of the state of Louisiana. The Council established the Diocese of Natchitoches with the see city at the oldest permanent settlement in the Louisiana Purchase territory, the town of Natchitoches, founded in 1714.

To serve as bishop of the newly established diocese, Archbishop Antoine Blanc of New Orleans nominated the pastor of Natchitoches, Father Auguste Marie Martin. Father Martin had been in Louisiana since 1846, long enough to have familiarity with the diverse culture and peoples of the region, as well as the many challenges they faced. These challenges included a malady common to the region – yellow fever – which Martin himself contracted in 1848.

In Rome on July 29, 1853, His Holiness Pope Blessed Pius IX approved Martin’s nomination with a formal Bull of Appointment. Meanwhile, in Louisiana, that summer of 1853 witnessed an epidemic of yellow fever with a previously unmatched ferocity and with a devastating reach as far north as Natchitoches and beyond. In a span of just a few weeks, New Orleans and its environs lost nearly 12,000 residents, marking an epidemic that is often cited as the worst, per capita, in United States history. This epidemic would be closely matched, in Martin’s lifetime, only by another major yellow fever epidemic he was to see exactly twenty years later in Shreveport.

Bishop Martin was born in Saint-Malo, an ancient seaport and an early Christian-Roman center of western France. Born February 1, 1803, just two months before the Louisiana Purchase and one year before Napoleon Bonaparte’s formal accession to reign as Emperor of the French, Auguste Marie Martin spent his formative years in a Gallican Church suffering beneath political and military oppression. It was an unstable time of Catholic history, felt most acutely in France, where the Church had already struggled for survival at the end of the eighteenth century due to the secularization attempts of French Revolutionary radicals. Not until after Napoleon’s final defeat at Waterloo in 1815 did France begin the process of restoring seminary education, abolished over two decades before. This was quite timely for the maturing Auguste Martin, who, since childhood, had a zealous love of the Virgin Mary and the saints that he would eventually bring with him to the priesthood.

He came to the United States as a priest to the missionary diocese of Indiana in 1838, and came to the Archdiocese of New Orleans in 1846, serving first at St. Joseph’s Church in Baton Rouge.

From Baton Rouge, Martin moved to Natchitoches as pastor, where Catholicism had long before been planted and was in need of renewal and growth. He served as vicar for the part of the state north of the 31st parallel. When the United States bishops approved erecting a new diocese in northern Louisiana, they were certainly aware of the growth trajectory and mission labors of Father Martin. Not surprisingly, he was the choice to be its first bishop.

That summer of 1853 witnessed an epidemic of Yellow Fever in Louisiana with a previously unmatched ferocity and with a devastating reach as far north as Natchitoches and beyond. In a span of just a few weeks, New Orleans and its environs lost nearly 12,000 residents, marking an epidemic that is often cited as the worst, per capita, in United States history. While the illness raged into central and northern Louisiana, this epidemic would be closely matched, in Martin’s lifetime, only by another major epidemic he was to see exactly twenty years later in Shreveport.

As the Vicar Forane of that area for several years, and now as the new bishop of a new diocese, Bishop Martin reported the pressing need for priests to the Society for the Propagation of the Faith in Paris. The bishop’s report to them gave a detailed and comprehensive view of the infant diocese and its 25,000 Catholics over 22,000 square miles with only four priests.

Doubtlessly recalling his own first missionary excitement in his native Brittany, one of the first acts of his episcopate was to return to France, seeking young men who could be moved to similar action. Bishop Martin notified the bishops of Rennes, Nantes, and Saint-Brieuc et Tréguier that he would be traveling through the Brittany region and asked permission to recruit any willing candidates from their seminaries. It was the first of three such journeys that Martin undertook during his time as bishop of Natchitoches.

His exhortation to the young seminarians of Brittany was much along the lines of Bishop Louis Dubourg in the early nineteenth century, who likewise faced a critical need for French speaking priests. When Dubourg returned to France he sent a circular as an enticement to attract priests and seminarians to join him in Louisiana:

We offer you no salary, no recompense, no holiday or pension. But, much hard work, a poor dwelling, few consolations, many disappointments, frequent sickness, a violent or lonely death, and unknown grave.

Among the many young men who followed Bishop Martin to Louisiana were Father Isidore Quemerais, Father Jean Pierre, Father Jean Marie Biler, Father Louis Gergaud, and Father Francois Le Vezouet, who all gave their lives in Shreveport in 1873, caring for the sick and dying during the yellow fever epidemic.

Following the loss of these five priests in 1873, Bishop Martin lived less than two years. On September 29, 1875, Bishop Auguste Marie Martin died in Natchitoches, with the considerable accomplishment of shepherding what had once been a fledgling diocese now in full bloom, and having himself been both missionary and emissary, he joined his Breton recruits and confreres in eternal life. He is buried in Natchitoches at the Basilica of the Immaculate Conception.

Greater love has no man than this, that a man lay down his life for his friends. (Jn 15:13)